I grew up in northern New Jersey, the New York suburbs. I moved to California in 1967, where I attended the University of California at San Diego and San Diego State University. I completed a degree in journalism at the University of Oregon and specialized in science writing. I’ve written about a wide variety of subjects, from golf courses to horses. My work focused on chickens after I wrote How to Raise Chickens, about raising traditional breeds in small flocks, in 2007. How to Raise Poultry followed in 2009. REvised editions were published in 2013 and 2014, respectively. I am a contributing editor to Diversity in Action. I have been an elephant seal docent since 2007, after my husband and I moved from Madison, Wisconsin to Cambria. My husband and I are Living History docents at Hearst Castle, dressing up in 1930s finery and decorating the estate for Night Tours. My work appears in many publications: Earth Island Journal, BioCycle, Backyard Poultry and others.

My work has tracked the growing interest in food issues, including food safety, additives, and concerns about chemical fertilizers, herbicides and pesticides.  Chickens are the mascot of the local food movement.

Food issues pervade our lives, health and well-being, and resonate in economic justice.  Just Food, a New York-based sustainable food organization, works with community gardens to add poultry operations in the city. Suburban backyard chickens are more popular than ever.

Living on California's coast drew me into ocean issues. As a docent at the Piedras Blancas elephant seal rookery, I see the constantly changing seal population on the beach and talk with the thousands of visitors who come to see them. It's a wildlife spectacle and all who visit come away seeing the ocean and those that live in it in a different perspective.

"Engaging my passion so that I can share that fire with others."

Writing about subjects that engage my passion so that I can share the fire with others. 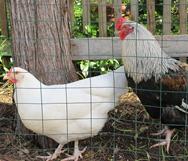